You can refuse consent at any time.

Advantages of the magnetic grate MRZ 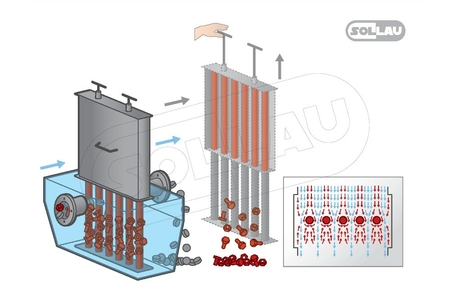 The liquid magnetic separator MRZ is designed to separate magnetic iron contamination from liquid substances (such as coolants and emulsions for various machining operations).

Design of the magnetic grate for liquids

The basic elements the magnetic grate separator in housing consists of are magnetic tubes (made from stainless steel). While the liquid material flows aroung the magnetic tubes, a very strong magnetic field (generated by the neodymium NdFeB magnets inside of the tubes) traps all metallic particles on the surface of the tubes. The sets of tubes are placed one above the other inside of the housing (or one behind the other – in case of a vertical position of the tubes) and the first set of tubes consists of one tube less. The grate sieve - created in this way – is in a very intensive contact with the flowing materia, can capture even the smallest ferromagnetic impurities and guarantees an extremely high separation efficiency. For best results the inlet part of the separator can be equipped with dispersion cones that disperse the material flow over the magnetic tubes.

Which way is the magnetic grid for liquid products cleaned?

The metal particles captured on the magnetic tubes migrate to the rear of the tubes where they remain protected from wash-off until the tubes are cleaned. During the cleaning the magnetic cores are pulled out of the tubes (either manually or pneumatically) into the upper part of the separator housing. The captured magnetic impurities fall off spontaneously. Thanks to the encased version of the magnetic grate separator the neodymium cores are totally maintenance-free.

SOLLAU – our products are welded by real professionals!

Is designed to separate magnetic iron contamination from liquid substances (such as coolants and emulsions for various machining operations).

We produce magnetic separators in these three levels of magnetic induction

Which industrial branches can the grid magnet be used in?

The grate magnet in housing finds use especially in engineering.